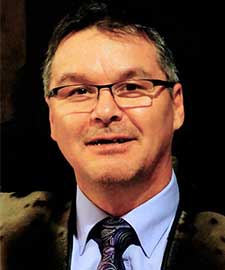 I’m honoured and privileged to address you all as Vice-President of Kuujjuaraapik-Whapmagoostui Renewable Energy Corporation (KWREC), a legal entity that represents Inuit/Cree partnership in the ownership of the proposed Wind Energy Project, which will serve as component to the local diesel powerplant owned and operated by Hydro-Quebec Distribution (HQD).

The Inuit of Kuujjuaraapik and the Crees of Whapmagoostui have lived together side-by-side in our community for hundreds of years. Together, since arrival Europeans in the homeland we shared, we overcame many difficult times, such as extended periods of famine, sickness, and other social and economic challenges. Increasingly, by exercising our inherent right of self-determination, we acquired new methods of governance in order to survive in changing times. In 1975, the James Bay & Northern Quebec Agreement (JBNQA) was signed by our respective leadership, a Treaty that allowed for our sister communities to be recognized as municipalities under Quebec law on the Inuit side of our community and under federal jurisdiction on the Cree side. Although we gained many benefits from this Treaty, the JBNQA has divided our community in many respects, with each side having its own municipal services, including policing.

The Whapmagoostui-Kuujjuarapik Hybrid Power Plant Project (WKHPPP), developed since 2011 with the collaboration of both sides of our community, will allow our twin communities to come together once again, and collectively work toward promoting social and economic development, at the same time, ensuring the protection of the environment. This is important for us since both Cree and Inuit cultures and way of life are land-based.